The reports and statistics of government and non-government sources clearly show that India has a learning crisis which if not addressed will erode the demographic dividend. The existing formal education has still not been able to include the children from marginalized section. Identifying this grave need Vision 2040 decided to create schools under IPES in localities where good number of chidren of schooling age are out of umbrella of education.

Informal Primary Education System (IPES) is a concept which should be regarded as the stepping stone in to the mainstream educational system for underprivileged children. In this system 5 classes (In the first year 3 classes) with children divided on the basis of age and prior knowledge shall be formed. The target group shall include underprivileged children of slum dwellers and downtrodden between the age group of 5 to 15 years, who have not gone to school or have dropped out due to financial and social constraints.

The system shall function as a primary school with the following objectives:

Keeping in view the above aims and objectives the Manappat Foundation, under its Vision 2040 goal, has established Vision Informal Schools (VIS). One such school is established in Mewali village of Hathras District and the other in Shahjamal locality of Aligarh city. Both these locations were selected as they are backward on all developmental parameters including education.

Mewali is an under-developed village located 26 km from Hathras Head Quarters. The population comprises mostly of farm laborers and gypsies belonging to backward and scheduled castes both from majority and minority communities. The demography is slightly dominated by minority community in population who are less empowered than their compatriots. With one government primary school this village had very low accessibility to education. After baseline survey and discussion with village elders and Pradhan it was decided to establish a school. The school now has about 150 students coming from all communities and classes. They have been divided into three groups based on their level of education. Four school teachers are teaching them English, Hindi, Urdu, mathematics and sciences. Moral and civic training is also provided to make them good and responsible citizen.

Shahjamal locality, classified as slum, is densely populated. A cluster of tiny lock manufacturing units are located here. The people of the area, mostly poor, are engaged in these lock manufacturing units. The area, despite being a part of the industrial city, does not have basic facilities like proper drinking water supply, primary healthcare centre and adequate government schools.

Since the school is Informal, we hired two rented rooms in the target locality. These rooms were converted into class rooms after making proper arrangement of sitting, lighting, black board, charts etc. The school is running successfully in three shifts as given below:

In the morning shifts we have about 50 students divided into two classes depending on their knowledge level. Out of 50 about 12-15 children do not know how to write, around 15 are able to write English alphabets and numbers from 1 to 50 in English while the rest are able to read and write in English, Hindi and Urdu but their level of understanding is below 1st standard of NCERT. We decided to follow the NCERT syllabus as standard target. The two teachers for Morning Shift are trying to uplift the level of these children to the 1st standard of NCERT in the first phase. The uninitiated students are given special attention.

Afternoon Session 20 girls are enrolled. Most of them had dropped out of school owing to poverty and other personal reasons. They are taught academic subjects as well as trained in sewing and stitching. They are presently at primary level. It is intended that they continue their studies and pass the High School Exam (Class X) through open board. A teacher and a trainer are engaged for this Session.

The Duration of Vocational Training course is six-months. With a plan to empower the girls by training them in professional stitching standard course and equipment are being used.

In the Evening Shift 20 boys are enrolled. Most of them are working in lock units or elsewhere. They too had been to schools earlier but due to poverty they had to drop out. Due to discontinuation of studies for long period the level of knowledge is around 1st standard of NCERT. But many of them are bright and have acquired knowledge randomly through experience. We plan to educate them so that they may pass High School Exam (Class X) through open board.

Our team is conducting surveys in other underprivileged locations in Aligarh District. Soon new IPES schools in other locations with will be added this year and next year.

The 1st Annual Meeting of Vision 2040 held on Sunday, October 16, 2016 at Residential Coaching Academy (RCA), AMU. Vision 2040 Project is an endeavor of Manappat Foundation, a Corporate Social Responsibility wing of Manappat Group, to achieve significant advancement in the educational, economic and social status of the marginalized communities of Uttar Pradesh.

The aim of the meeting was the assessment of annual progress on current projects of Vision 2040 and deliberations on prospects of future projects. It served as a platform to acknowledge the contribution and support of well wishers of Vision 2040 project. Notable personals of AMU and scores of concerned persons attended the meeting.

The Chief Guest of Annual Meeting, Lt. Gen. (Retd.) Zameer Uddin Shah, V.C of AMU emphasized on the importance of school education for Muslims. He referred schools as the foundation of one's character which should be further strengthened. "Our aim is to open Sir Syed National School in every district," said V.C.

The Guest of Honor Dr. Nadeem Tarin, President of Nadeem Tarin Educational Society highlighted the scope of work required to be done in small towns, villages and remote areas. He promised full help and support to Vision 2040 team in Sambhal for education, employment and health related initiatives. 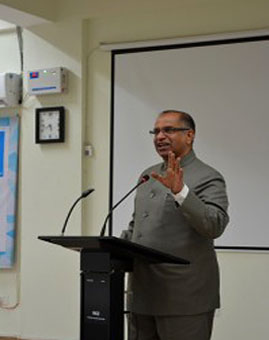 The Managing Trustee, Manappat Foundation, Mr. Ameer Ahmad gave a retrospective on the genesis of Vision 2040 project. He also gave an inspiring account of his journey so far. He acknowledged the efforts of the team members, donors and supporters. "For societal change we need transformation," he emphasized. He further appealed the audience to volunteer for the noble work being carried out by Vision 2040. Also, he hoped that through his project he will be able to establish a network and create synergy among various NGOs working for minorities in U.P.

The First Sequential Foundation Course 2016-17 for strengthening the teaching of Mathematics, Science and English in Deeni Madaris run between August 27 till September 3, 2016 at C-9, Zakir Bagh, AMU, Aligarh has been completed successfully.

This course was the conducted as first joint activity of Manappat Foundation (MF) and School education Trust for the Disadvantaged (SETD) under the able chairmanship of Prof. Rashid Hayat Siddiqui.

A total of 17 participants, most of them new teachers in Madaris and two internal candidates.

The highly experienced teachers, most of them present and previous faculty members of AMU, were engaged in teaching the participants. The contents of the Course were designed in modular form to educate the participants in the three subjects according to NCERT syllabus of class VI level.

The participants were given classroom lectures and tutorial sessions daily to strengthen their understanding of new concepts and their details.

An expectation and feedback survey was also conducted on participants. The participants appreciated the teaching effort as well as stay arrangement and were keen to return for the next sequence. The Second Sequential Foundation Course for this batch will be conducted from October 1 to 8, 2016

“A systematic approach towards a holistic development model for marginalized communities of the backward districts of Uttar Pradesh.”